As Deputy Secretary of Defense, Bill Clements oversaw some of the most important weapons systems of the 1970s. This briefing book overviews the role Bill Clements played in advocating for the cruise missile, identifying needed improvements in existing weapons systems, and overseeing the further development of the Minutemen missiles.

Bill Clements and the Evolution of the Cruise Missile

Secretary of Defense Melvin Laird initiated the cruise missile program in 1972, with initial cost estimates in January 1973 ranging between $2 and $3 billion. Deputy Defense Secretary Bill Clements became a stalwart proponent of the cruise missile program, even announcing the program to the press before it was officially in place, according to an August 10, 1973 memo to Henry Kissinger.

Clements requested Military Procurement Authorization for research and development in June 1973, but Congress denied funding for the cruise missile program. Clements then outlined in a letter in August 1973 how DoD could use $210 million in Air Force and Navy technology research funds for cruise missile development.

Nixon and later Ford used the cruise missile program as a negotiating chip in the SALT II talks with the Soviets. In May, the Soviets hoped to ban intercontinental cruise missiles. The problem was that although cruise missiles were considered conventional weapons and did not provide a first-strike capability, weapons designers could simply remove the conventional warhead and replace it with a nuclear warhead.

By the end of Ford’s term, the NSC staff judged that the U.S. was 10 years ahead of the Soviets on cruise missile technology, according to a National Security Council Study on U.S. Strategy and Naval Force Requirements.

In 1973 and 1974, Acting Secretary of Defense Clements continued developing a range of weapons systems and military reforms.

Similarly, Clements oversaw the August 1973 GLORY TRIP 43GM test, which was a single Minuteman III missile, without a nuclear warhead. The launch was controlled by the Airborne Launch Control Center and in coordination with the Atomic Energy Commission (AEC) to test the AEC’s supplemental safety rules. 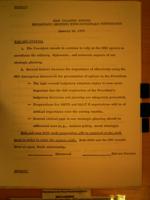 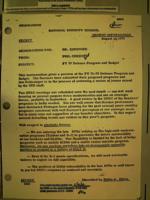 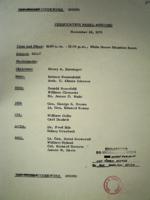