Starting with Nixon’s election in 1969, the U.S. began moving towards a smaller military footprint abroad. In 1975, the defense officials recommended eliminating Southern Command (SOUTHCOM), which was located in Panama. On February 24, 1975, the Ford administration issued a memorandum stating that he saw a problem with eliminating SOUTHCOM and ending the presence of U.S. troops in the region. According to a February 25th memo from Bill Clements, DoD agreed with the administration that the U.S. needed to retain some troops in Panama, albeit at a reduced level. At the same time, the administration was also negotiating a new Panama Canal Treaty to return partial control of the Canal Zone to the Panamanians. The administration wanted the new Canal Zone treaty to allow a reduction in American presence while retaining access to the Canal and the capability to intervene in case the Panamanian government collapsed or could no longer control the Canal. See also a memo from Kissinger to the President on the Panama Canal Treaty negotiations.

On April 22, 1975, Ford requested that State and Defense Departments work in a joint group to draw up options on a Panama Agreement that would be beneficial to both agencies. State wanted the treaty negotiated quickly, while Defense was more concerned with assuring a U.S. presence in the region.

The joint group created two lists: actions that Ford could take unilaterally, and actions dependent on Congress. All were designed to assure continued American power in the Canal Zone while giving the Panamanians more authority in the region. However, the policymakers worried that Congress was unlikely to approve because of the presidential actions dependent on Congress because it was intent on checking presidential power after the excesses of the Nixon administration. The joint group was even concerned that the Senate might refuse to ratify a new Canal Zone treaty.

Throughout the negotiations, the administration was concerned that if the U.S. failed to negotiate a new treaty, the U.S. would lose international legitimacy and spark anti-American violence in Panama. See, for instance, the talking points for the May 15th NSC Meeting on the Panama Canal.

As of May 1975, the treaty negotiators had come to three agreements:

During a July 23, 1975 NSC meeting, Bill Clements supported DoD’s position that the U.S. should remain in control of operations of the Canal for a minimum of 25 years and in control of defense of the Canal for 40 years, proposals that State believed would not be accepted by the Panamanians. In addition, Clements was concerned about the reliability of the Panamanian leader, Genral Omar Torrijos. DoD wanted to bring Torrijos to Washington to explain the political difficulties surrounding the negotiations, express the administration’s commitment, and press Torrijos to prevent violence. However, policymakers believed that Torrijos would be unlikely to accept any temporary agreements that could be overturned under a different presidential administration.

The administration was concerned that the negotiations could collapse as the summer of 1975 wore on. Congress was becoming increasingly pessimistic about the treaty’s terms, and their pessimism turned into obstructionism. The House eventually approved the Snyder Amendment to deny funding for continued negotiations. The administration worked to defeat the Snyder Amendment.

Ford was backed into a corner. The administration was committed to continuing negotiations over the Panama Canal Treaty, but could not conclude the treaty with an obstructionist Congress. Torrijos would not agree to a treaty that might not be honored by the next president. As a side effect of the policy logjam, DoD was unable to disband SOUTHCOM. Treaty negotiations continued slowly with the administration’s new goal of signing a treaty in early 1977, according to Kissinger’s briefing for the July 23, 1975 NSC meeting. President Carter eventually signed the Panama Canal Treaty, sometimes called the Torrijos-Carter Treaty, in September 1977. 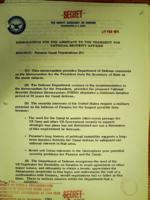 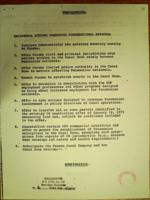 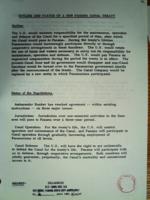 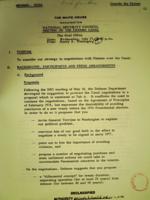