On October 6, 1973, the “Yom Kippur” Arab-Israeli War broke out. U.S. policymakers had been working to prevent the conflict; once war began, the administration worked toward a ceasefire, according to the agenda talking points for an October 18, 1973 Cabinet meeting. The Nixon administration calculated that if it maintained Israel’s trust, it persuade Israel to accept a ceasefire, according to the transcript of the October 17, 1973 Washington Special Action Group (WSAG) meeting.

Soon after the war broke out, the Soviet Union began a massive resupply operation for Egypt and its allies. In response, the U.S. began resupplying Israel, as detailed in the October 23 WSAG meeting talking points. The United Nations Security Council passed a resolution demanding a ceasefire on October 25 that was accepted by all sides.

However, because of the U.S. resupply effort, the Organization of Arab Petroleum Exporting Countries (OAPEC) declared an oil embargo against the United States, Canada, the United Kingdom, Japan, and the Netherlands. See also the Draft Presidential Message to Congress on the oil crisis.

By November 1, the WSAG reported to President Nixon that because of the embargo, U.S. energy demand would soon exceed supply by 15%. The U.S. would be be short two to three million barrels of oil a day out of a total shortage of roughly 4.5 million barrels for all affected countries, according to a November 5th draft of Nixon’s speech on the crisis and an October 31st memo to Clements on the effects of Arab cutbacks and the embargo.

The administration predicted that the embargo would lead to a recession, a jump in electric utility prices, and a jump in airline prices, according to a November 1, 1973 memo to Nixon from John A. Love. Love, the Director of the Office of Energy Policy, decided on a broad series of steps to counter the predicted negative consequences, including working with Congress to pass an Energy Emergency Bill, prohibiting industries from moving from coal to petroleum, working to get some power plants to shift to coal, increasing oil production in the U.S. and beginning a ration system, and encouraging actions to increase energy efficiency. Nixon’s administration also established the Energy Emergency Action Group to recommend further actions, according to a November 25th fact sheet on energy emergency actions.

In addition to domestic measures, the administration worked to convince the Arab oil producers to lift the boycott. The U.S. decided to focus its efforts on Saudi Arabia; the policy makers believed that if Saudi Arabia eased the boycott, the rest of the Arab countries would follow suit, according to a November 28th memo on American unilateral and multilateral responses to the Arab oil embargo. U.S. policymakers argued to the Saudis that if they damaged their relations with the West, the Soviets would gain a stronger foothold in the Middle East and abroad.

At the same time that the U.S. was working on ending the oil embargo, Bill Clements and the Defense Department continued work on replacing the Israelis’ air and armor assets lost in the war, as detailed in a November 28, 1973 memo on Israeli arms requests. The Soviets were still resupplying the Arabs, and the administration feared that the ceasefire might not hold. The United States hoped to resupply Israel to maintain a balance of forces that would support a peace settlement in the Middle East.

The administration—in particular, Henry Kissinger—worked to establish an Egyptian-Israeli Disengagement Agreement, according to a March 5, 1975 memo on the energy crisis chronology. Although the agreement failed to materialize, the efforts were sufficient to lift the embargo in March of 1974.

The embargo had long lasting effects. For example, while Japan was friendly with Israel prior to the 1973 Arab-Israeli War and oil embargo, it adopted a stronger pro-Arab posture after the war, according to a briefing paper for the November 11, 1974 Senior Review Group Meeting on Japan. Additionally, the embargo changed how U.S. policymakers thought of future conflicts in the Middle East. While the embargo ended in 1974, the fear of another embargo continued to loom over the following administration. In 1976, when the Ford administration feared another war, it immediately began planning for another oil embargo. 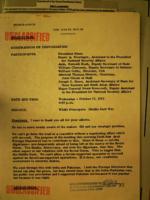 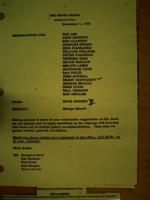 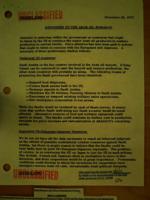 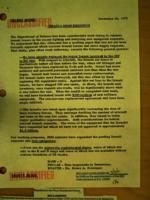