Twenty-three years after the end of the Korean War, the Korean peninsula appeared poised to erupt in war during the “Korea Tree Incident.” According to a memo for a Washington Special Action Group Meeting (WSAG) on August 18, 1976, two U.S. Army officers serving in the United Nations Command (UNC) at a joint security zone between North and South Korea were murdered in an unprovoked attack by the North Koreans while they were attempting to prune a tree.

The murders were a serious provocation, but they came after years of North Korean threats. For instance, less than three years earlier, on December 4, 1973, Kissinger received a memo from W.R. Smyser that North Korea had attempted to restrict American access to islands off the coast of the Korean peninsula. Smyser argued that although the North Koreans did not claim ownership over the islands, they claimed ownership of the waters around them, which allowed them “unprecedented and frequent naval incursions.” U.S. policymakers urged the South Koreans to dispute the claim through their hotline to the North, and approached the Soviets and the Chinese to diffuse the situation. U.S. policymakers decided to continue resupplying the islands as usual and act as a ferry escort service if North Korean threatened the supply ships. The U.S. also stressed that South Korea should not under any circumstances fire the first shot.

When the U.S. conducted reconnaissance missions to detect a possible North Korean buildup, the North Koreans claimed the missions were hostile and the U.S. was attempting to start a war according to a December 5th telegram. This and similar incidents led Ford to order National Security Study Memorandum 226 on May 27, 1975 to better understand the threats emanating from North Korea.

Starting in the early spring of 1976, the North Korean government broadcast nearly daily propaganda claiming the U.S. was committing aggression and threatening peace. On August 5th, after a shooting between North and South Korean soldiers in the DMZ, the North Koreans released a memo claiming that the U.S. was introducing new weapons to the Korean peninsula, and was attempting to instigate a war. The WSAG received a report for the August 18, 1976 meeting that assessed that the North Koreans were trying to influence the upcoming American presidential election. They believed that North Korea hoped that American casualties would cause the American public to oppose the continued presence of U.S. troops on the peninsula.

During this tense situation, a small group of U.S. and South Korean troops set out on a simple mission to cut back a tree in the jointly controlled zone. The tree obstructed the view from nearby observation towers. About 15 North Korean soldiers approached and demanded the group stop trimming the tree. When they refused, the North Koreans attacked with crowbars, clubs, and axes. Two U.S. Army officers were killed, and four other U.S. soldiers and four South Korean soldiers were wounded. See, for instance, a memo to William G. Hyland on the WSAG Meeting on Korean Incident on August 18, 1976.

During the August 18th WSAG meeting, Deputy Defense Secretary Bill Clements asked “wasn’t that a routine operation-keeping the area clear?” The answer was yes. The WSAG members judged the North Koreans authorized an attack on any group of Americans or South Koreans who were vulnerable, and the North Korean soldiers likely saw the tree-trimming group as a target of opportunity. Ford tasked the WSAG to think about what would be the best response.

When the WSAG met the next day, they had already decided that U.S. and South Korean forces should cut down the tree entirely. The question was whether they follow a diplomatic route, informing the North Koreans of their plans and potentially inviting international observers, or would they cut the tree without warning, using the maximum number of men to do so and therefore maximize their show of force. The WSAG recommended the latter option. They also sought approval from Ford to conduct a B-52 flyover at the same time the tree was cut down to further demonstrate U.S. military might. Finally, they developed initial plans to move a Naval Task Force in from the Sea of Japan, fly in F-111s from Idaho, and even developed bomb North Korean barracks. See also the Director of Central Intelligence Briefing for the WSAG on August 19, 1976.

The Americans and the South Koreans swiftly cut down the tree. The North Koreans were scared, and agreed to dismantle two North Korean guard-posts. The plan to bomb the barracks was eventually scuttled, despite having the support of Clements and Kissinger. Kissinger blamed the decision to forgo the barracks strike on Ford’s presidential election speech that Americans would not be in combat anywhere in the world. However, during the August 25, 1976 WSAG meeting, the policymakers continued planning for a response in case further incidents occurred. 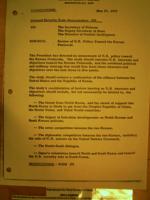 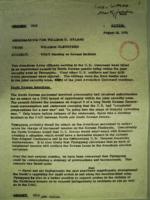 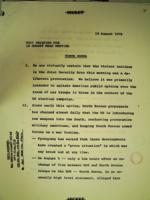 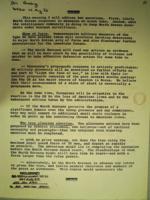 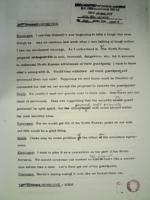