In the 1970s U.S. policymakers saw particular strategic importance in the Horn of Africa. It sits at the intersection of the Red Sea passage to the Mediterranean and the Indian Ocean and controls a point of access to the Middle East oil fields. Since 1943 the Army and Navy operated a telecommunications facility in Asmara, Ethiopia, called Kagnew Station. In 1973, the Army ceased operations at Kagnew, but the Station remained a major telecommunications base for the Navy.

The Decision to Close Kagnew

U.S. policymakers were concerned about the security of Kagnew Station. According to a March 29, 1973 memo to the Staff Secretary of the National Security Council, the Soviet Union was increasing arms transfers and deployments of military advisors to Somalia in the winter of 1973. However, Department of Defense (DoD) analysts judged that, even with the additional Soviet supplies, the Ethiopian military was strong enough to thwart a Somalian attack.

By May 1973, DoD and the State Department wanted to phase out most U.S. activities at the Kagnew Station by June of the following year and transfer the intelligence work done at Kagnew to the British base at Diego Garcia in the Indian Ocean. In National Security Study Memorandum (NSSM) 184, Nixon ordered a review of the regional stability of the Horn of Africa if the U.S. withdrew. Notably, Nixon wanted to know how the Soviet strategy in the Horn would change if the U.S. left Ethiopia.

Nixon’s order led to a July 6, 1973 study on the Horn of Africa prepared by an ad hoc Interdepartmental Group on Africa. In the study, The Group expressed concern that insurgents in Ethiopia might attack American forces at Kagnew Station. DoD analysts argued that withdrawing from Kagnew would save $12 million per year. Additionally, a withdrawal would constrain the Soviet Union’s rationale for remaining in Somalia. However, withdrawing would decrease the the tactical communication capabilities of the Navy for about two years, until the Navy could bolster the capabilities in Diego Garcia.

The debate over Kagnew was part of a broader reconsideration of the U.S. military’s footprint abroad. Throughout 1973, the Nixon administration worked to contracting the U.S. military footprint and limit it to areas of greatest importance. Secretary of Defense Schlesinger informed the public during a November 30, 1973 press conference that DoD had been working for some time on reducing overseas bases to reduce costs, although he did not explicitly refer to Ethiopia.

On August 14, President Nixon affirmed U.S. political, economic, and strategic interests in Ethiopia in National Security Decision Memorandum (NSDM) 231, but approved the Department of Defense’s recommendation that it shut down Kagnew Station.

The situation changed in early 1974, when several Ethiopian military units rebelled against the government, as described in an April 22, 1974, memo for Kissinger. After the mutinies, there were large-scale calls for political reform in the country. The Washington Special Action Group believed the instability would adversely affect bilateral relations with Ethiopia and potentially spread across the Horn of Africa. U.S. policymakers determined that the United States also needed to limit the influence of the Soviet Union, China, and radical Islam in the region. They also decided the United States needed to maintain military, economic, and humanitarian assistance to Ethiopia and maintain contact—but avoid close association—with the present government.

According to an April 27, 1974 memo to the Deputy Secretary of Defense, the WSAG agreed with the Department of Defense’s recommendations that the U.S. needed to be “as responsive as possible” to Ethiopian requests for assistance by providing $11.3 million in military assistance, plus $6 million in foreign military assistance credits, and sales of military equipment. The WSAG also agreed to expedite financial assistance for drought and recovery aid. Because Ethiopia was one of the few countries friendly to the U.S. in the northwest section of the Indian Ocean, the U.S. considered it of high strategic value, especially for potential military basing needs. Nonetheless, U.S. aid fell short of Ethiopian requests: Ethiopia requested $100 million in military assistance, but the U.S. had capped the assistance available for all of Africa at $40 million.

In September of 1974, the military regime deposed Emperor Haile Selassie with the intent of imposing a socialist state. The U.S. had to readdress its policy positions towards the region in light of the likelihood of increasing instability in the region. In addition to violating human rights in Ethiopia, the military regime nationalized the properties of 13 U.S. investors worth $10 million. In part because the regime was less friendly to the U.S. than its predecessor and in part because the U.S. was already planning to transfer its telecommunications facility to the Indian Ocean, Ethiopia’s strategic importance to the U.S. was fading. Additionally, while U.S.-Ethiopian ties faltered, the U.S. strengthened its ties with Kenya and Sudan so it wouldn’t lose influence in the region even if it withdrew from Ethiopia.

In October 1975, one year into what had become the Ethiopian Civil War, President Gerald Ford issued NSSM 233 on the future of Kagnew Station. Ford wanted information on the pros and cons of retaining the Kagnew Station, and how American interests in Ethiopia would change if the U.S. left Kagnew. Ford also wanted to know whether he should expect the personnel at Kagnew Station to be targeted in the conflict between the Ethiopian government and the Eritrean insurgency.

On February 12, 1976, the Senior Review Group (SRG) met to review the future of the Kagnew Station and relations with Ethiopia. The SRG determined that the U.S. should reverse course and remain at the Kangew Station as long as possible—but it also recommended that the Defense Department continue studying alternative basing sites.

In December of 1976, the National Security Council ad hoc Interdepartmental Group finished a report in response to NSSM 248 from November 13, 1976 on U.S. Policy Towards Ethiopia. The Group argued that while the U.S. was trying to maintain the level of involvement on the Horn of Africa, the situation on the ground changed dramatically since the outbreak of civil war. U.S. influence in the bilateral relationship with Ethiopia was “sharply diminished” under the revolutionary regime. The Group feared that a retreat from the area would signal that the U.S. had lost another region to the Soviets, who were gaining strength in Somalia. The analysts believed that an Ethiopian-Somali war was a real possibility, which raised the stakes for the U.S. in deciding a course of action soon. They were also extremely concerned with the government’s human rights abuses. The U.S. had to chose whether to continue supplying Ethiopia and attempt to maintain influence in the region, or to withdraw.

The SRG discussed NSSM 248 on December 22, 1976 and again reversed course. The State Department’s supported closing Kagnew Station by September 1977. State supported continued military cash sales to the Ethiopian government if they requested them. DoD was critical of the previous policy decision for failing to adequately address the significance of the Soviets gaining strength on the Horn of Africa in case of a U.S. retreat, but agreed with State that the U.S. should pursue a September 1977 date for closure of the Kagnew Station. DoD also argued that the U.S. needed to develop a plan in case of an outbreak of Ethiopian-Somali hostilities. DoD and State agreed that the U.S. should not totally disengage from Ethiopia. 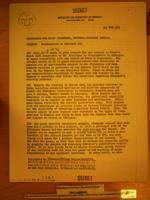 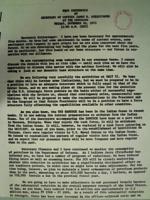 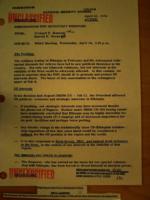