In the early 1970's, the Nixon administration confronted the potential implications of a burgeoning new field of technological development: environmental and weather modification, especially modifications that could be used for warfare, according to the May 2, 1972, National Security Decision Memorandum Number 165. The administration first addressed the issue in 1972, culminating in the 1972 Report of the National Security Council (NSC) Under Secretaries Committee on International Aspects of Weather Modification. Then, in August of 1973, the U.S. Senate passed a resolution calling for countries to pass a treaty prohibiting environmental or geophysical manipulation as a weapon of war.

For the second time during his administration, Nixon requested that the NSC Under Secretaries Committee take up the issue on April 26, 1974.

In the Committee, Bill Clements argued that the U.S. should maintain the ability to work on R&D related to environmental modification techniques, but supported the U.S. developing an international agreement to ban the use of such techniques in warfare.

On July 3, 1974, President Nixon and Soviet General Secretary Leonid Brezhnev released a joint statement advocating for "the most effective measures possible to overcome the dangers of the use of environmental modification techniques for military purposes." In that spirit, they decided to hold bilateral talks to outline a possible treaty.

Despite the upcoming bilateral talks on environmental warfare, the Soviets took the diplomatic initiative without American input. In August of 1974, Soviet Foreign Minister Andrei Gromyko sent a letter to the United Nations Secretary General Kurt Waldheim proposing that the General Assembly pass a resolution banning environmental warfare, according to a report on the Analysis of the Soviet Proposal and Key Questions.

In response, the Ford administration decided to push the Soviets to delay taking up the issue in the General Assembly until after the bilateral talks, according to a memo for Kissinger. Notably, the Ford administration was concerned that the Soviets were pushing for a ban on all environmental modification, not merely its military application. The American government continued to argue that some techniques of environmental modification for civilian purposes, such as a fog dispersal in emergency rescues, should be allowed.

During a Senior Review Group Meeting on August 28, 1974, the policymakers decided that they would create a working group to prepare for the bilateral negotiations based on two premises: first, the administration would "accept prohibitions on any military use of environmental modification techniques having long-term, widespread or especially severe effects." Second, the Ford administration supported international guidelines and a mechanism for settling disputes when environmental modification was used for civilian purposes. President Ford approved this approach in October of 1974 with National Security Decision Memorandum 277.

The bilateral talks led to the decision to pursue an international treaty in 1975 through the Conference of the Committee on Disarmament. The Ford Administration negotiated the Environmental Modification (or ENMOD) Treaty with the Soviets over the course of 1976. After further interagency study of the legal and national security issues in the treaty, the United States supported the approval of a United Nations General Assembly resolution approving the Convention on Environmental Modification on December 10, 1976. Ford sent a letter to the Speaker of the House and President of the Senate on January 19, 1977, urging them to support the treaty. The treaty banned the "military or any other hostile use of environmental modification techniques having widespread, long-lasting or severe effects as the means of destruction, damage or injury to any other State Party." President Carter signed the Treaty on the day it opened for signatures, on May 18, 1977, and the U.S. ratified the treaty on January 17, 1980.

Notably, the treaty addressed Bill Clements' concerns by allowing the continued research and development of environmental modification techniques for civilian purposes, so long as the techniques did not lead to widespread, long-lasting, or severe effects to the environment. 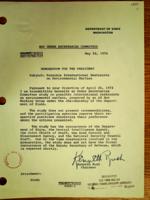 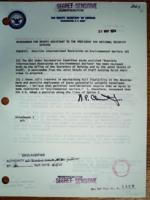 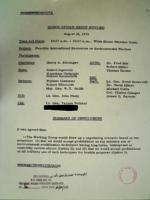