Briefing Books | The Arab-Israeli War and the American Resupply Effort, 1973

The 1973 Arab-Israeli War, also known as the Yom Kippur War, began on October 6 of that year when Egypt and Syria led a coalition of Arab states to retake the Israeli-occupied Sinai Peninsula and the Golan Heights.

Between 1967 and 1973, Presidents Johnson and Nixon repeatedly attempted, through both public appeals and diplomatic channels, to persuade the Soviets to limit the flow of the arms to the Middle East. The Soviets refused unless Israel withdrew from the territories it occupied following the 1967 Arab-Israeli War. When the 1973 war broke out, the United States and the Soviet Union resupplied Israel and the Arab coalition, respectively, with weapons, aircraft, and tanks.

Spain barred the United States from using facilities on Spanish soil as a base for American resupply efforts, according to an October 8 statement issued by the Spanish Government. As a result, the U.S. operated out of the Lajes base in the Portuguese Azores Islands.

The Washington Special Action Group (WSAG) set a goal during its October 16 meeting to increase the scale of the American airlift resupply effort, with the goal of delivering 25 percent more tonnage than the Soviets. During an October 17 WSAG meeting, President Nixon asserted that a ceasefire would affect the U.S. strategic position in the region and the global oil market. Nixon told the WSAG that at least some Middle Eastern foreign ministers were “desperately afraid of being left at the mercy of the Soviet Union.” Nixon ordered Department of Defense to augment the airborne resupply by sealift. He also questioned whether the Soviets would risk the entire U.S.-Soviet relationship over the Arab-Israeli conflict. Finally, he said that the U.S. had to bring Israel to the negotiating table.

In a memo to Kissinger, National Security Council (NSC) staffers explored whether the U.S. should cut off its military equipment pipeline to Jordan and Saudi Arabia and whether the U.S. needed to increase the frequency of its reconnaissance missions. Bill Clements was asked to deliver an update on the airlift of arms and supplies to Israel.

After one failed ceasefire, Israel and the Arab coalition enforced a ceasefire on October 25. The WSAG continued to discuss how to stabilize the ceasefire and continue resupplying the Israelis during its November 2 meeting. Clements and DoD continued with the sealift and aimed to achieve peak deliveries in mid-November.

Soon after the conflict ended, the administration began studying its role in the war. Earlier in the year, in May and June, Clements had led a study on crisis intelligence support. He used the study as a basis for interpreting the U.S. response to the Arab-Israeli War that fall. On October 23 Clements proposed that the National Security Council Intelligence Committee develop a working group to study the “timeliness and adequacy” of intelligence support during the Arab-Israeli War.

The Joint Chiefs of Staff sent a twenty-one man team to Israel from October 29 to November 10 to study Israeli and Arab losses. On November 14, Clements testified before Congress on the Israeli losses and the Soviet resupply effort. By November 28, the Department of Defense and Clements in particular were developing an arms resupply plan. Israeli officials requested the F-4 Phantom II and the Douglas A-4 Skyhawk planes, in addition to other items.

The U.S. continued to analyze the effect of the Arab-Israeli War long after the ceasefire commenced. According to a paper prepared for an NSC meeting on March 28, 1975, on Middle East Policy—a year and a half after the war—the American strategy for Arab-Israeli negotiations between 1969 and 1973 aimed to persuade the Arab states to rely less on the Soviets and turn towards the U.S. The paper argued that the “war demonstrated that Soviet arms alone could not regain” Arab territory and that military action against Israel could propel the U.S. and the Soviets into peace negotiations. The paper claimed that there were three major results from these policy shifts: first, “key” Arab leaders reoriented their policies toward the U.S. and away from the U.S.S.R.; second, the U.S. had the capability lead a political movement to take pressure of the U.S. and Israel, especially in regards to the oil embargo; and, third, Egypt, Syria, and Israel were able to come to historically significant agreements. 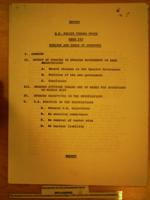 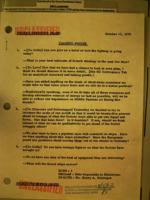 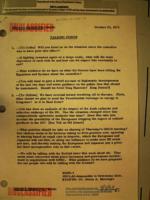 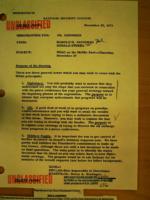